It’s a question we hear frequently around the office, and in the world of lighting it’s something that gets increasingly enquired about. Just what is AC and DC power? And why is it so special that Australia’s most famous rock band chose to name themselves after it? Apparently, according to the band, it symbolises the raw power of their music. Although don’t quote us on that.

What is AC power?

AC Power is the type of electricity that you will commonly come across, as it is used mainly in homes, offices, and shops.

AC stands for alternating current, which as you can guess, means that the current is constantly changing direction. It is in fact doubling back on itself, and one complete cycle constituting the time given a current travels in one direction before coming back on itself. The unit of measurement for one of these electrical cycles is “Hertz” (Hz) which you may have heard of before. Around the UK and Europe the typical frequency is 50Hz, indicating the current is performing 50 cycles per second.

This is the type of power we use for our Low Voltage products, and all of them run through an AC transformer. The fact it can be transmitted through a transformer makes it extremely versatile, and it can suit a variety of transmission needs.

What is DC power?

DC Power is short for direct current, which only travels through a circuit in one direction (as opposed to its friend AC of course.) This was in fact the first type of electricity to be transmitted in large areas, especially in America when the first cities started to use electricity around 100 years ago. However it was difficult to power rural areas using DC power, as the power dropped off every mile it travelled from the generator. It became much easier to use AC power as it is much more efficient for everyday use.

DC power is still used today, but this mainly for large, high voltage operations, such as electrochemical applications for example. It is still the type of power produced by fuel cells, batteries and generators today; this just gets transferred into low voltage AC electricity using transformers.

However if you ever see a device stating “AC/DC” on the side, this means it can run on either type of current. The legend goes this is how AC/DC discovered their name; one of them saw this on a sewing machine and decided it was a good name for a rock band!

What is the Difference Between LED Bulbs and Standard Filament Bulbs?
FAQs 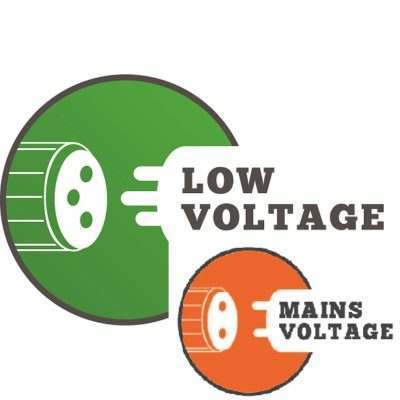 What is the difference between low and mains voltage connectable lights?
Featured Inspiration