It’s that time of year, when the majority of people have well and truly decked their halls, and, in some cases, their gardens too! So we decided to contact one of our favourite customers to ask them all about their seriously impressive Christmas lights display and to find out more about them.

Sue and Terry Ramplin live on the Isle of Wight and are loyal Festive Lights customers. Each year, they turn their entire house and garden into a winter wonderland. It is the largest private Christmas display on the island and not only is the size impressive, it also raises thousands of pounds for local charities. Here’s more on how, each year, this amazing couple turn the Isle of White into the Isle of Light!

Check out this video, from the Island Echo, featuring impressive aerial footage of Sue and Terry’s display.

FL: Your Festive Lights display is fantastic! Are your neighbours ever tempted to compete and put on their own light show?

Terry: Well our display actually started as a competition. Seventeen years ago, I started to put up a few decorations and then my neighbours began to put up a few more, and it kind of grew and grew. Sadly, a few years ago they passed away, but we carried on the tradition and now our display is famous amongst the whole community.

FL: When’s your official ‘switch on’?

Sue: This year our official switch on will be at 6.30pm on 3rd December. With festive food, live music and celebrity guests, it’s no small affair. Everyone comes together to support the event, the local butchers provide food for everyone and we have a local band to play Christmas music.

Terry: In the past we’ve had the late, great Coronation Street actor, Geoff Hughes, to turn them on, as well as our local radio presenter John Hannam. We’re keeping this year’s special guest under wraps, but it’s a good one!

FL: How long do you leave the decorations up for?

Terry: I begin putting the decorations up midway through October and they stay up until New Year’s Eve.

FL: Roughly how many bulbs do you use?

Sue: Too many to count!  The Christmas tree is enormous and we’ve bought 11 strings of lights from Festive Lights already just for the tree.

Sue: People love our nativity scene and the 15ft Christmas tree attracts a lot of attention. The nativity scene is extra special as the animals have been handmade by some of our neighbours and friends.

FL: When do you start planning for your display?

Terry: We begin in September and have a rigid plan of attack. We start with the garage roof, then the front of our house, then the nativity scene. Finding a big enough tree is the next challenge (they aren’t easy to source on the Isle of Wight), then we add our white camo snow and finally all the silhouettes.

FL: Is this a tradition you’ll pass on?

Terry: I’d like to think so, but our son lives overseas and our daughter and grandchildren prefer to see granddad doing the hard work instead of getting stuck in themselves.

FL: Would you prefer your display to be visible from space or for it to be Christmas every day?

Sue: Definitely to be visible from space. Imagine having to make Christmas dinner every day!

FL: What signals the start of the festive period for you?

Sue: It’s actually funny you should ask, most of our neighbours say that Terry up on the roof beginning to prepare the light is what signals the start of Christmas for them, which is lovely.

FL: Shrek the Halls or Deck the Halls? What is your favourite festive film?

Sue: We love Deck the Halls! We can identify with it quite a lot, when he’s sketching the house designs we love that because we doodle our designs as well.

Terry: And we also had a year where the fuse blew. I was in the garage trying to switch on the lights and they just wouldn’t work.

FL: What snack and tipple will you be leaving for Santa on Christmas Eve?

Sue: The classic carrot and sherry.

FL: How much have you raised for charity so far and which ones do you support?

Terry: Last year we raised around £4,500 and we’re hoping to beat that target this year, so fingers crossed.

Sue: This year we’re donating to two charities. Ability Dogs for Young People trains Labrador puppies to help disabled young people in their day-to-day lives. Our other charity is Home Start, which helps parents and families with young children who are struggling to cope.

We hope you enjoyed this post and liked hearing about Sue and Terry’s amazing Christmas lights display. If you have a large display and would like to be featured in one of our next case studies, please send us an email to marketing@festive-lights.com. 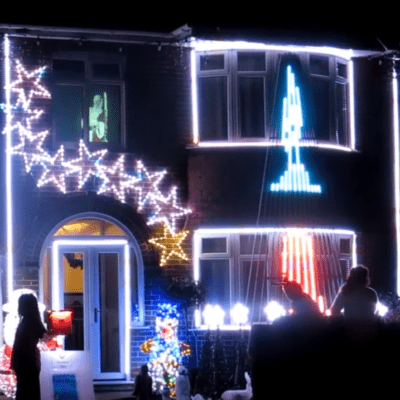 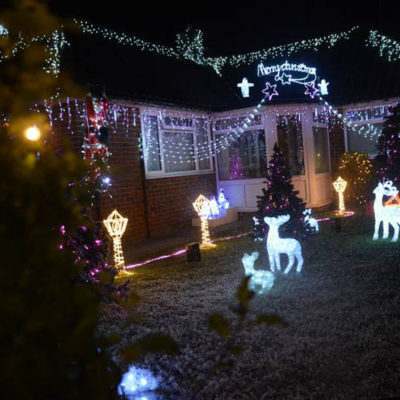 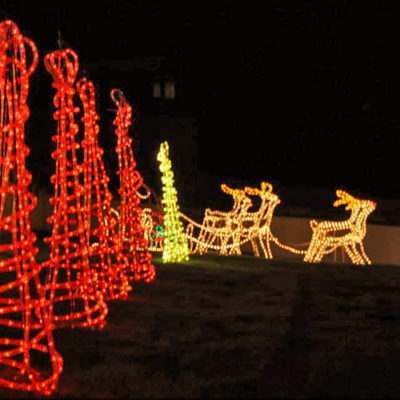